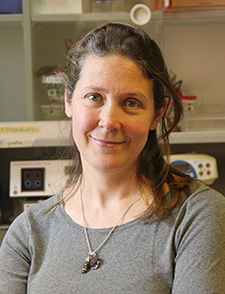 My research interest is the DNA damage response during meiosis. Upon graduating in Biology at the University of Seville, I joined Dr. Pérez-Martín laboratory at Centro Nacional de Biotecnología (Madrid). There I succesfully defended my Thesis in 2003. Our work highlighted the relevance of cell cycle regulation during the pathogenesis and helped to define the connections between cell cycle and the pathogenesis program induction of U. maydis.

During my thesis period I developed a keen interest in understanding how cell cycle progressing is controlled by DNA damage checkpoints, also I wanted to explorean alternative model system. For these reason I chose to do a postdoc in Dr. Boulton’s group at Clare Hall laboratories-CRUK (London), which uses Caenorhabditis elegans as a model system to understand the DNA damage response. During this period my research contributed to understand how the DNA damage response (DDR) senses DNA lessions and how triggers the activation of DNA repair pathways during meiosisand mitosis to repair such lessions.

In February 2008, I joined Dr. Aguilera´s group at CABIMER (Sevilla), to continue my research in DDR and to expandmy expertise in the mechanisms that lead to genomic instability. I wasa Senior Researcherleading theC. elegansprojects that complemented the interest of Dr. Aguilera regarding the effects of transcription in genome stability in metazoans. Additionally, I continued my own project uncovering the in vivo relevance of a DNA damage-dependent phosphorylation identified by peptide array at the end of my stay of Boulton’s laboratory. I focused in the phosphorylation of the synaptonemal complex, a proteinaceus structure that forms between homologous chromosomes during meiosis,which, I showed,bias the repair of persistent DSBs towards inter-sister recombination. This work validated the data I obtained in the peptide array screening that is the base of my research to undertand DNA damage during meiosis.

Since 2019 I have an emerging PI position in Cabimer. My long term goal is to address at the molecular level the biological relevance of the DNA damage-dependent phosphorylations at meiotic proteins to ensure genome stability. Understanding this is of vital importance in order to have a major comprehensive view of the sources of errors that result in dramatically deleterious outcomes including infertility, miscarriages and birth defects such as Down syndrome. This knowledge of DDR regulation during meiosis should, therefore, provide important insights into fertility defects diagnosis and may present opportunities for therapeutic intervention.

Genomic DNA is under constant attack from both endogenous and exogenous DNA damaging agents. Without proper repair the resulting DNA damages would lead to alteration of genomic structure thus affecting the faithful transmission of genetic information. In addition, defects during meiosis lead to aneuploidy, an extreme kind of genetic instability associated with fertility problems, miscarriages and mental retardation syndromes.Very little is known about the relationship between the meiosis progression and the DNA damage response. Since cells undergoing meiosis during oogenesis stay arrested in meiosis I for long periods of time and therefore vulnerable to DNA lesions we speculated if the increase in genome instability inferred from the increase in aneuploidy that correlates with mother age might be related to defects in DDR during meiosis. Phosphorylation is a key regulator in many processes and therefore an obvious first candidate to analyse, and key kinases of DNA damage checkpoints are ATR and ATM. The aim is to address at the molecular level the biological relevance of the DNA damage dependent phosphorylations observed in silicowith the peptide array techniqueand to determine how ATR/ATM DNA damage phosphorylations contribute to the regulation of different DNA repair pathways, both to ensure genome stability of meiotic cells. Regarding genome stability I am also involved in research lines which objective are determine the mechanisms by which cells solve transcription-replication conflicts to prevent genome instability with emphasis in RNA-DNA hybrids and its effects in chromatin condensation.

Castellano-Pozo M, Garcia-Muse T* and Aguilera A. 2012. The Caenorhabditis elegans THO complex is required for the mitotic cell cycle and development. PLoS One 7: e52447. (*corresponding).

Castillo-Lluva S*, García-Muse T*, Pérez-Martín J. 2004. A member of the Fizzy-related family of APC activators is regulated by cAMP and is required at different stages of plant infection by Ustilago maydis. J Cell Sci. 117: 4143-56. (*Joint first)