Cell-replacement therapy appears as an attractive approach to treat diabetes and thus, has become a major goal in the field of diabetes research. Unfortunately, there is a shortage of beta cells obtained from human cadaveric donors. Thus, it is important to identify alternative sources of functional beta cells. In this sense, research in our lab focuses on the use of stem and/or progenitor cells to obtain insulin-producing beta cells. To this end, we work on the following research lines:Transcriptional control in pancreas development

Role of GATA4 transcription factor in endoderm and pancreas development

GATA4 null mice die at early stages of development. The early lethality of the Gata4 knockout embryos impairs a detailed analysis of the role of GATA4 in endoderm-derived organs. Although recent reports have suggested a role of GATA4 in pancreatic endoderm development, the precise role and the mechanisms by which this transcription factor contributes to the earliest steps of pancreas development are not clear yet. We hypothesize that GATA4 might contribute to pancreas specification by activating Pdx1 promoter expression in the pre-pancreatic endoderm. To test this hypothesis we are analyzing embryonic developing pancreas of Gata4 conditional knockout, which are generated by Cre/loxP technology.

ß cells could be (re-)generated by stimulation of ß cell replication and/or differentiation of stem/progenitor cells. The studies suggest that, during adult life, the principal mode of ß-cell replacement is the replication of pre-existing ß cells. However, other reports show that ß-cell can also be formed from alternative source of ß cell neogenesis. In vitro proliferation of insulin-secreting cells derived from adult human and mouse islets have already been achieved using different external stimuli and culture techniques. However, success in expansion of functional insulin-producing cells in vitro has been limited. In addition, culture of adult islets results in loss of ß cell phenotype, apoptosis and senescence. Thus, general objective of this project is to develop protocols that allow us the expansion of ß cell mass in cultured adult islets and to identify the cellular origin of new ß cells. These studies will contribute to develop protocols able to increase the proliferative potential of ß cells. This could provide novel methods for expanding ß cell mass. Once established, these methods would aid in the design of regenerative and cellular therapies for diabetes.

The possibility that bone marrow, cord-blood or peripheral blood cells are capable of progressing to insulin producing cells has raised a fascinating question about developmental plasticity. In fact, adult stem cells able to transdifferentiate into ?-like cells have been isolated from bone marrow and umbilical cord blood. . In addition, in cells derived from unmobilised adult human peripheral blood a population of pluripotent stem cells with multi-developmental potential has been isolated. Finally, recent report from our group studied the unexpected plasticity of monocytes, in order to derive insulin-producing cells from human peripheral blood. These cells expressed beta cell specific transcription factors, secreted insulin and C-peptide in a glucose-dependent manner and normalized blood glucose levels, during one week, when transplanted in streptozotocin diabetic mice. This study opens a real possibility of the clinical application of these cells. In this project, we explore the clinical potential of these cells in order to be used in diabetes cell therapy.

Rojas A., De Val S., Heidh A. B., Xu S-M., Bristow J and Black, B. L. (2005) Gata4 expression in lateral mesoderm is downstream of BMP4 and is activated directly by Forkhead and GATA transcription factors through a distal enhancer element. Development 132: 3405-3417

Rojas A. and Black B. L. (2008). Transcriptional Control of Cardiac Boundaries Formation. In Advances in Developmental Biology 4: 93-116

Rojas A., Kong S-W, Agarwal P., Gillis B., Pu W.T. and Black, B.L. (2008) Gata4 is a direct transcriptional activator of Cyclin D2 and Cdk4 and is required for cardiomyocyte proliferation in the second heart field-derived myocardium. Mol. Cell. Biol. 28: 5420-31 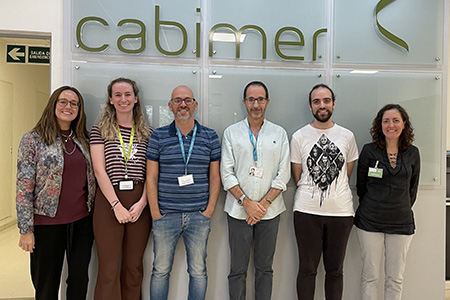