A shared feature among all microtubule (MT)-dependent processes is the requirement for MTs to be organised in arrays of defined geometry.At a fundamental level, this is achieved by precisely controlling the timing and localisation of the nucleation events that give rise to new MTs. In most model systems studied so far, MT nucleation relies on gamma-tubulin complexes that control MT formation spatio-temporally. Gamma-tubulin complexes are necessary because spontaneous nucleation of new tubulin polymers is kinetically limiting both in vivo and in vitro. Surprisingly, the majority of gamma-tubulin containing complexes are found in the cytoplasm, where they are devoid of significant MT nucleation activity. This raises the question as to how gamma-tubulin nucleating complexes are recruited and then activated at specific intracellular locations and how this recruitment is regulated. 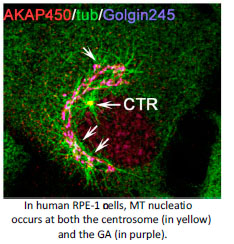 An answer to this question is found in the activity of MT-organising centres. The primary MT-organising centre in proliferating-animal cells is the centrosome. However the discovery of MT-nucleation capacity of the Golgi Apparatus (GA) has substantially changed our understanding of MT network organisation in interphase cells. Microtubule arrays derived from either the centrosome or the GA differ in their properties reflecting their different, yet complementary, functions. The centrosome consists of a pair of centrioles surrounded by a pericentriolar matrix (PCM). MT nucleation at the centrosome occurs at the PCM that is highly enriched in gamma-tubulin nucleating complexes. Several PCM components are known to serve for gamma-tubulin recruitment and their roles in MT nucleation along the cell cycle have been widely studied. Interestingly, MT-nucleation at the Golgi apparently relies on the same PCM components although our knowledge on this process is much more limited (Rios RM. Phil Trans R Soc. 2014, 369).The main focus of my lab is to understand how Golgi- and centrosome-based microtubule arrays work in concert to ensure the formation of specialised microtubule arrays along the cell cycle and during cell differentiation and morphogenesis. 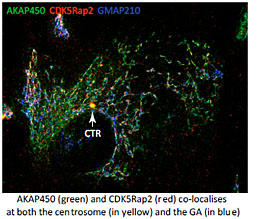 For that aim we explore the mechanisms underlying MT generation at both the GA and the centrosome in several model systems, and in different physiological contexts. We are interested in understanding the composition, the activity and the regulation of the MT-nucleating protein complexes present at the PCM and at the GA. These complexes contain AKAP450, Pericentrin and CDK5Rap2. Although all of them have the capacity to bind gamma-tubulin, the key regulator at the GA appears to be AKAP450 that serves as a scaffold to recruit the other proteins (Rivero et al, 2009; Hurtado et al., 2011). The role of PCNT and CDK5Rap2 is less known. Conversely, PCNT and CDK5Rap2 have been widely characterized at the PCM but almost nothing is known about their roles at the GA. In collaboration with M. Bornens (Paris, France), we are now carrying out a global study of the three proteins at both organelles along the cell cycle. We are using CRISPR technology, live imaging and Superresolution Microscopy to address how PCM components at the centrosome or the GA regulate PCM organisation, centrosome duplication and Golgi dynamics. 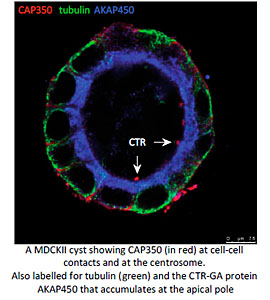 Another particularly relevant issue is how MT nucleation at either the GA or the centrosome contributes to MT remodelling during the establishment of apico-basal polarity in epithelial cells. We have recently described that the MT-binding centrosomal-Golgi protein CAP350 also localizes at adherents junctions of epithelial cells. By interacting with alpha-catenin, CAP350 participates in the formation and stabilisation of apico-basal oriented MT bundles at the cell periphery. Thus allows to epithelial cells to acquire their characteristic columnar morphology. Studies in 3D-cultured cell models and Medaka embryos revealed that CAP350 is required for proper epithelial morphogenesis (in collaboration with JR Martines-Morales, CABD, Seville). We are now addressing the role of junctional CAP350 in mitotic spindle orientation that could account for this requirement.
The major differences between centrosome-nucleated and Golgi-nucleated MTs stem from their geometry and nature. It has been known for long time that MTs emanating from the GA are highly enriched in post-translationally modified tubulins, in particular detyrosinated and acetylated alpha-tubulin. Centrioles and primary cilia are also highly acetylated structures. In collaboration with M. Nachury (Stanford, USA), we are studying the role of MT acetylation, and more specifically that of the tubulin acetyl-transferase aTAT1, both in Golgi and centrosome dynamics. To address this question we are using MEFs derived from aTAT1 KO mice and CRIPSR-mediated alpha-TAT1 mutant RPE1 cells (in collaboration with J Pines, Gurdon Institute, Cambridge).
Overall, our work aim to address fundamental questions for the comprehension of mechanisms that regulate cellular organisation in metazoa. The results obtained not only will provide us with a wider knowledge on cell biology but they also own a potential impact on health. Indeed, abnormalities in the CTR have been related with several types of cancer and some centrosomal proteins including Pericentrin and CDK5Rap2 are defective in patients with rare genetic disorders such as ciliopathy, microcephaly or dwarfism.

G. Egea and Rios R.M. The role of the cytoskeleton in the structure and function of the Golgi apparatus.In The Golgi apparatus.State of the art 110 years after Camilo Golgi’s discovery. Editors: A. Mironov, M. Pavelka, and A. Luini. Springer-Verlag, 2008, 270-299 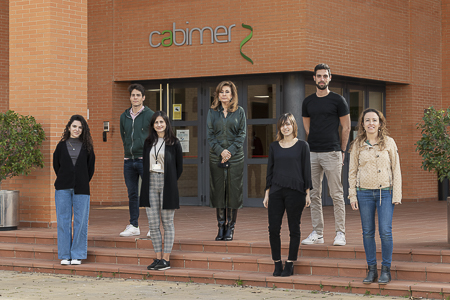