The genetic information in eukaryotic cells is tightly wrapped around histone proteins to form chromatin, which is highly repressive to processes occurring on DNA. However, we know since pioneering studies by Vincent Allfrey in the early 1960s that histones are subjected to a wide variety of covalent post-translational modifications (PTMs) that can modulate DNA accessibility, thereby playing key roles in many biological processes. Thus, rather than a simple impediment, chromatin is a highly dynamic regulatory platform that helps to fine-tune the control of DNA metabolic processes, including transcription, replication and repair.

During the past three decades, we have witnessed major advances in our understanding of the functional role of histone PTMs in key cellular processes. Although most breakthrough discoveries were driven by scientific curiosity, many of them have far-reaching implications for the treatment of human disease. This is based on the notion that, unlike genetic alterations, most of the known histone PTMs are likely reversible, which offers considerable promise for therapeutic intervention. Importantly, there are increasing number of reports linking alterations of the histone PTM landscape to different cancer states. Our main interest is the characterization of the pathways leading to histone PTMs and their involvement in cancer.

Recent genomic analyses in myeloid leukemia patients have identified several mutations in genes encoding RNA splicing factors. Significantly, AML cells bearing splicing factor mutations are preferentially sensitive to genetic or pharmacologic modulation of splicing, thereby providing a therapeutic window of opportunity. We have characterized the genome-wide distribution of histone H4 arginine 78 mono-methylation (H4R78me1) in AML cells and found that it extensively overlaps with that of a transcription factor co-purifying with the core splicing machinery. This transcription factor is overexpressed in AML patient samples, where high expression levels significantly correlates with poor prognosis. We are currently investigating the molecular pathways leading to H4R78me1 and their possible impact on AML biology.

If you are interested in joining our group as master student, PhD student or Postdoc, please contact us at: gonzalo.millan@cabimer.es 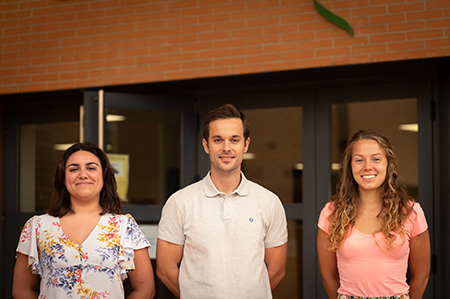