The overall thrust of research in the University of Seville CMN laboratory at CABIMER is governed, to a large extent, in how to best manipulate or end inadequate immune responses as an approach to cell therapy in neurodegenerative diseases with inflammatory and/or autoimmune components.
Consequently our work has focused on understanding molecular and cellular mechanisms that regulate immune homeostasis and contribute to neuronal dysfunction and death, with particular emphasis on the role of key cell populations as microglia, dendritic cells and different T regulatory cell subsets in the development of Parkinson’s disease (PD), Multiple Sclerosis (MS), and Amyotrophic Lateral Sclerosis (ALS).

Immunotherapy and mechanisms of disease-linked protein aggregation in neurodegeneration

This research line lead by Dr. Roodveldt is mainly focused on understanding the imbalance of the immune response triggered by misfolded or aggregated proteins linked to neurodegenerative ‘misfolding’ diseases, and how this response is/can be modulated by molecular chaperones.

Neurodegenerative ‘Protein misfolding diseases’ or ‘proteinopathies’, including Parkinson’s disease and Amyotrophic Lateral Sclerosis, are increasingly prevalent disorders that are characterized by the aberrant misfolding, aggregation and deposition of specific proteins, e.g. alpha-synuclein, alpha-amyloid or SOD1, in certain areas of the brain. The underlying pathogenic mechanisms of these pathologies are still poorly understood, while no effective therapies have been yet developed. In the last few years, a link has been established between such aberrant protein aggregates and microglial activation and inflammation leading to neurodegeneration, indicating that the immune response in the CNS could indeed have a key role in the onset and progression of these devastating disorders. Besides their ‘classical’ function in preventing protein misfolding and aggregation, heat-shock proteins (HSPs) have been shown to participate in the activation of lymphocytes and macrophages, and in the maturation of dendritic cells. More generally, in the last few years extracellular HSPs have been shown to function as endogenous immunomodulators for innate and adaptive immune responses. 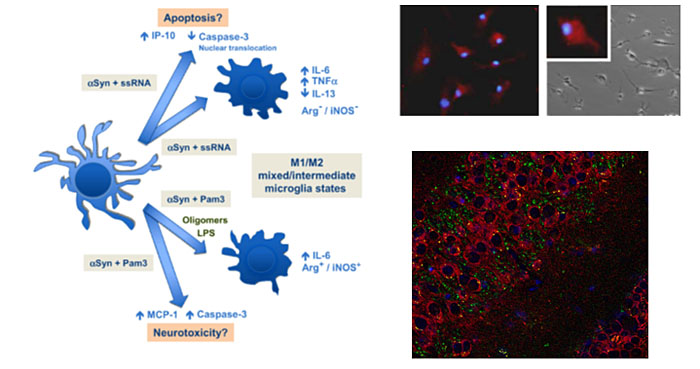 At CMN lab, we use different approaches ranging from elucidating molecular mechanisms of aggregated protein-chaperone interactions and complex formation, to the functional characterization of the immune response elicited by such complexes by using cell culture tools as well as in vivo mouse models to perform disease-modifying interventions.

Modulation of innate and adaptive immunity by endogenous neuropeptides in neurodegeneration

The discovery and characterization of new molecules and processes that regulate key activities on immunocompetent cells is of interest, but this is it especially when the same molecule has both neuroprotective and immunomodulatory activities. This is the case for some neuropeptides. Up to date, there are over 50 neuropeptides identified. Neuropeptides are endogenous biologically active peptides secreted by neurons or non-neural cells (in particular, we pay special attention to immunocompetent cells) that bind to specific receptors in either neurons or non-neural target cells. Thus, neuropeptides are part of the common biochemical language used by the immune and neuroendocrine systems that build a bi-directional network of major relevance in health and disease. Among them, the 28-amino acid VIP neuropeptide is a molecule (Figure 2) that has evolved from being considered a mere neuropeptide/hormone into a novel agent for modifying immune function and, possibly, as a cytokine-like molecule. VIP and the Activity-dependent Neuroprotective Protein (ADNP) are the neuropeptides under current investigation. We found that Activity-dependent Neuroprotective Protein (ADNP) has a role in the immune homeostasis of the Central Nervous System (CNS). Moreover, ADNP is known to harbor neuroprotective activities that map to the ADNP-derived sequence octapeptide called NAP (NAPVSIPQ). Cellular and molecular mechanism of action of NAP and VIP/ADNP are being investigated including its potential advantages in animal models.

Nanoparticles for diagnostics and for controlled and targeted drug delivery: improving the drugability of neuropeptides

Neuropeptides are potentially valuable tools for clinical applications as they offer many distinct advantages over other bioactive molecules like proteins and monoclonal antibodies due to their reduced side effects and simple chemical modifications. Despite such advantages, the difficulty with neuropeptides often relies on their poor metabolic stability and reduced biological activity intervals.
At CMN lab an active line of research is aimed at developing nanostructured organic and inorganic systems either for the appropriate delivery of VIP or for VIP-targeting. These technologies stands as an alternative starting point for chemical manipulations of the neuropeptides in order to improve potency, selectivity, or pharmacokinetic parameters. This could facilitate the effective translation of preclinical studies related to VIP to clinical realities, most of which are commonplace for other neuropeptides and endogenous regulators of the immune system within the central nervous system.
We have the expertise to functionalized and characterize peptide-engineered nanoparticles by DLS, AFM, TEM. Besides focus on chemical synthesis of nanoparticles (NPs), we are particularly interested in the effects of the interaction of NPs with the immune system. Not only in terms of toxicity, but in terms of biocompatibility and functional status. 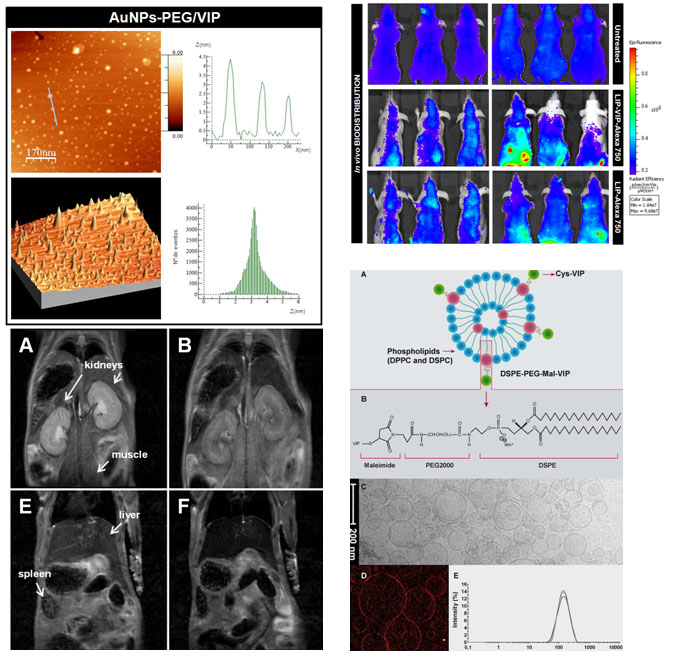 Figure 3. Several NPs are being investigated at CMN Lab for diagnostics and controlled and targeted drug delivery based on neuropeptides and other endogenous immune-modulators (CMN Lab).

Even though the progressive death of motor neurons is ultimately responsible for the development of ALS, in the last few years it has become accepted that multiple mechanisms involving other cell types, notably microglia activation, T cell infiltration to the CNS, and a dysfunctional adaptive immunity, have a key participation in the pathophysiology of disease. This is our activity area related to basic research in ALS. In this sense, at CMN Lab, we explore the interface between the host/innate immune systems and self-proteins with distinctive behaviour. We work with SOD1 and TDP-43 proteins (overexpressed as inclusion bodies or secreted by lentiviral transduction). Besides these mechanistic insights, we are merging molecular imaging and “omics” approaches in ALS research, in both preclinical and clinical settings. High resolution metabolomics, molecular imaging MRI and CT-PET technologies are currently extensively used in our laboratory. 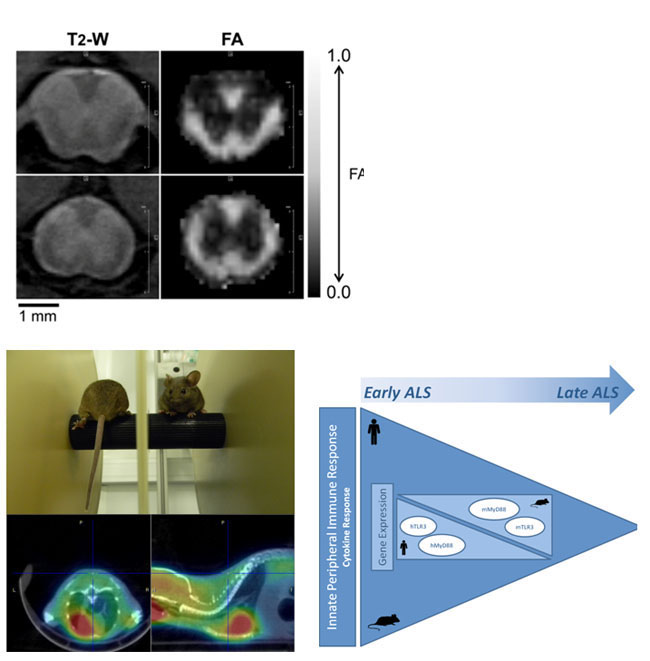 Figure 4: Unpublished results from a study by our group in which we measured the FA of SOD1G93A mice using Echo-planar imaging (EPI), a very fast acquisition data scheme that allowed us to increase the number of diffusion directions to 81. Reduced FA values vere found en early stages of disease progression, suggesting that DTI MRI could be used for early diagnosis and follow up of ALS in preclinical resarch. Below, CT-PET imaging in SOD1G93A mice and rotarod test (NIR Lab) together with one of our working model in clinical settings.

The CMN Lab has a joint research program in MS/ALS led by Dr. M. Garcia-Toscano, Scientific Director of Amarna Therapeutics (Holland) in Spain 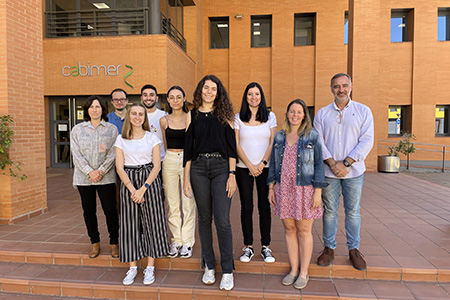