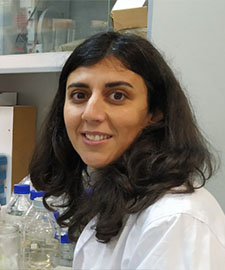 In my research career, I have focused on transcription and replication as main sources of genetic instability.
During the PhD, I worked on transcription, and R-loops in particular, as a source of genetic instability. I developed powerful genetic tools for the identification of R-loops in vivo by the heterologous over-expression of human AID in yeast mutants of the THO complex, involved in mRNP biogenesis. I also contributed to show that the ubiquitous accumulation of co-transcriptional R-loops impairs replication fork progression placing it as a major cause of transcription-associated genetic instability. In agreement with R-loops being a frequent source of DNA damage, I showed that to survive replication stress, THO mutants require a functional S-phase checkpoint, known to be essential for the maintenance of replication fork stability.
I moved to Clare Hall Laboratories (UK) in 2010 to get further insight on the role of S-phase checkpoints in replication fork stabilization. The combination of whole-genome sequencing technics with classic genetics allowed me to describe that the Rpd3L histone deacetylase complex is responsible for the DNA damage sensitivity of checkpoint mutants. I then searched for the essential factors involved in fork destabilization in yeast and human cells, uncovering an unexpected link with recombination.
Back to Spain in 2015, I continued my interest in the role of chromatin in recombination at forks. I also contributed to identify new genes involved in the prevention or resolution of R-loops in yeast and human cells and explored the causes of DNA-RNA hybrid accumulation in human cells deficient in the tumor suppressor gene BRCA2.
Since 2020, I am professor at the University of Seville and study the causes and consequences of replication fork damage, including in transcription-replication conflicts, as well as the mechanisms of fork stabilization and repair, focusing on the role of histone acetylation.